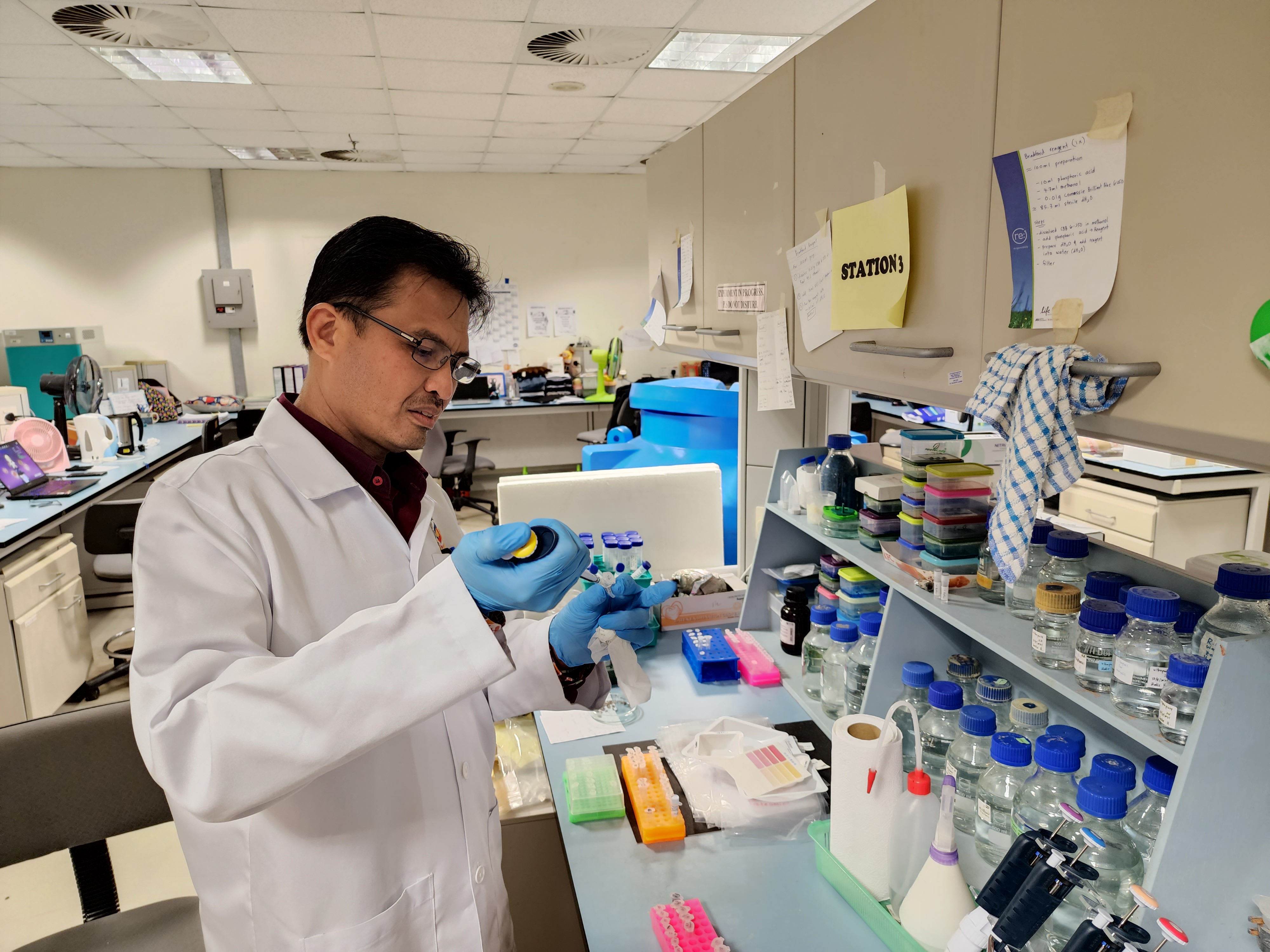 06 September 2022
In the sago-producing region of Mukah in central Sarawak, a familiar scene of sago palm trunks floating in the river captures a story of livelihood, sustenance, and legacy. To many ethnic Melanaus in this state, who are still the primary manufacturers of sago-related products in Malaysia, sago palm is considered as valuable as gold.

Sago palm (Metroxylon sagu Rottbøll) is a perpetual crop which means no replanting is needed, and on top of that, this palm has multiple uses ranging from food to building and hunting materials for surviving and living in the forests. The palm is also well known for its excellent high starch yield compared to commonly found starch sources such as rice, wheat, and corn, making it truly one of nature’s bounties.

About 200 years since written records documented evidence of sago trade between Singapore (historically a key port and trading centre at the time) and Mukah, researchers from the Centre for Sago Research (CoSAR), Faculty of Resource Science and Technology (FRST) in Universiti Malaysia Sarawak (UNIMAS) announced that they have finally completed the genome sequencing of the sago palm.

Secret of life
“We are proud to announce this feat, especially as this year marks the 30th anniversary of UNIMAS”, said Professor Dr. Mohd Hasnain Hussain, the Director of CoSAR. He further explained that “somewhere among all these assembled puzzle pieces (datasets) of the sago palm genome, lay the fundamental foundation of the sago palm genetic information”. The information obtained from this study, as part of the sago’s genomic landscape, when completed in the future, will eventually be the complete genomic encyclopedia for the sago palm. This means that all related information about how sago produces starch, curbs salt stress, and combat diseases can be obtained using the information from the genome sequence.
“In biology, especially in the area of molecular biology, obtaining the genome sequence is like finding out the secret of life of that particular species (sago plant in this case). In the world, we are the first to reveal the sago genome sequence”, said Hasnain.

Behind the scenes
In laboratories housed in UNIMAS’ Faculty of Resource Science & Technology (FRST), three sago molecular biology research project groups led by Prof Hasnain, Dr. Chung, and Dr. Hairul Azman Roslan respectively, have been pursuing genome sequencing work for years. Sago plant samples were collected from the collection grown on the East Campus of UNIMAS. Leaves were brought back to the lab, where they were processed to obtain the DNA. Following that, the DNA samples obtained from the leaves were sent to third party labs to get the read for the sago genome. The raw letters of the genome were then analysed by the faculty’s postgraduate students to obtain information about the sago inner working.
“To me, this is the achievement of researchers’ collaboration within UNIMAS, for UNIMAS”, said Hasnain.

The UNIMAS team managed to map the genome of sago palm using the Illumina sequencing platform and Nanopore technology. The analysis revealed that the sago palm is estimated to have a genome size of 510 million base pairs (509,812,790 bp). It comprises approximately 33,000 genes, with around 96.39% of these protein-coding genes having been successfully identified in terms of their functionality. Based on the newly generated genomic data, the evolution of sago palm was traced to its immediate relative, which is also a well-known commodity in Malaysia - the oil palm (Elaeis guineensis).

Sago palm is one of those rare food crop that stores starch within its trunk, making it one of the largest starch producers per plant with a trunk that can grow up to 15 metres in height. Based on the sequenced genome, the team was able to explain the mystery behind the high starch storage capability of the sago palm.  By scanning the sago palm genome using the reference genes under the Kyoto Encyclopedia of Genes and Genomes (KEGG) database, the team found that more than one-third of the discovered genes are deemed actively involved in starch metabolism.

The genome sequence would significantly aid in explaining the previously observed phenomenon in that smaller starch granules and higher starch yield was observed in sago palms grown in mineral soil compared to acid sulfate soil, hence influencing the starch growing period and harvesting time. Also, sago palm employs starch storage compounds to curb the adverse effects of growth impediments. This is where the starch-related genes play an indispensable role in maintaining optimal and sufficient starch levels in the trunk of the sago palm as starch compactness in the trunk directly impacts the starch harvest amount.

“The significant roles of these starch-associated enzymes in sago palm in determining starch yield is essentially the centre of sago palm genetic research, and this is one highlight not to be missed on the journey to crop improvement via genetic engineering technologies”, mentioned lead researcher Dr. Chung Hung Hui, who together with PhD candidates Leonard Lim Whye Kit and Melinda Lau Mei Lin, as well as Professor Dr. Mohd Hasnain Hussain, and Dr. Gan Han Ming of Deakin University, Australia, published the genome sequencing data in the journal ‘Data in Brief’.

The next step would be to utilise the genome knowledge to produce more starch within a shorter timeframe, much like what has been done in the past for commercial food crops like wheat, rice, and corn. Even better, the novel superior sago palm genes can be identified and isolated and grafted into other crops so that these crops can also have the salt tolerances and disease resistance capabilities similar to the sago palm. This will be both ground-breaking and can provide assurances on our food security needs.

From UNIMAS, to the world
The research to sequence the sago genome was fully funded by the Tun Openg Chair for Sago Research Chair UNIMAS. “We are grateful that the Sarawak state government has been very supportive since the inception of UNIMAS 30 years ago, especially proven in this case with the seed fund to establish Tun Openg Chair for Sago Research. And now through a Sarawak Research Development Council grant, we are expanding the molecular studies of sago palm as well,” added Hasnain.

Apart from the genome study, various areas of sago palm studies are currently being pursued in UNIMAS to follow up on the completion of the sago genome sequencing, such as transcriptomic study and downstream aspects of sago utilisation.

“In addition to research in molecular biology of sago, UNIMAS is also actively working on research related to the added value of sago products”, Hasnain said. “We hope to discover more from the research and transfer that knowledge to communities”.

Publish modules to the "offcanvs" position.